Why We Shouldn't Ask Muslims to Condemn Terrorism 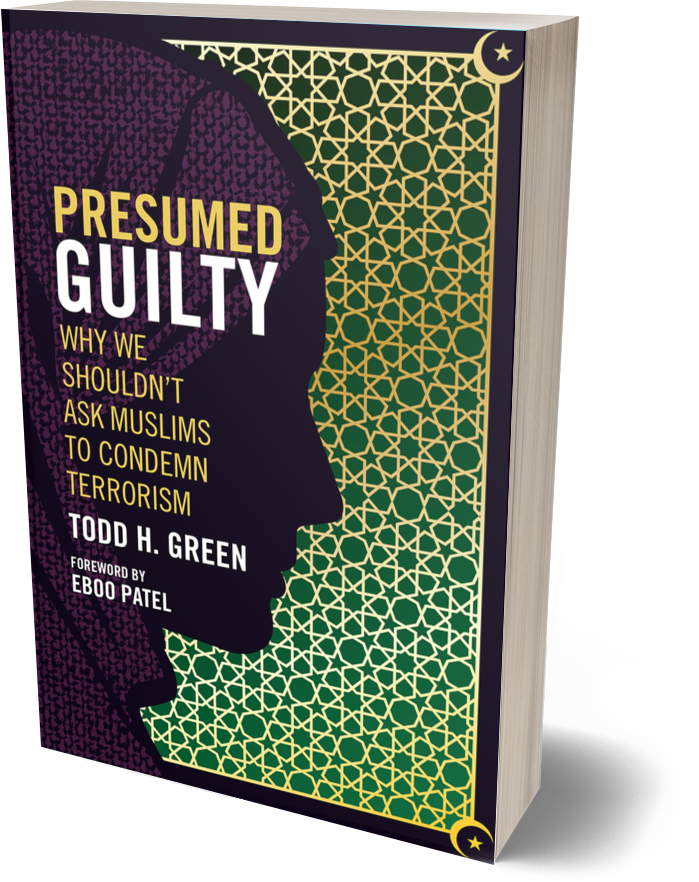 All of us should condemn terrorism–whether the perpetrators are Muslim extremists, white supremacists, Marxist revolutionaries, or our own government. But it’s time for us to stop asking Muslims to condemn terrorism under the assumption they are guilty of harboring terrorist sympathies or promoting violence until they prove otherwise. In Presumed Guilty, renowned expert on Islamophobia Todd Green shows us how this line of questioning is riddled with false assumptions that say much more about “us” than “them.”

This book is an invitation for self-examination when it comes to the questions we ask of Muslims and ourselves about violence. It will open the door to asking better questions of our Muslim neighbors, questions based not on the presumption of guilt but on the promise of friendship.

Relentlessly asking Muslims to condemn terrorism is a distraction. It forces Muslims to explain themselves, to prove their innocence, to defend their humanity. Yet the rest of us never seem satisfied with their efforts. So we keep asking the same question. Over and over.

But asking Muslims to condemn terrorism distracts the rest of us too. It keeps us from facing our own violent history and from understanding how Western nations rose to power and prominence on waves of unjust violence. It keeps us from asking critical questions about how our current foreign policies or national security initiatives contribute to a violent world order. It keeps us from applying the word ‘terrorist’ to violent people who look like me, share my religious or cultural background, or serve in my government.

When we are this distracted, we become blind to the hypocrisy involved in asking Muslims to reject the kinds of violence we would never be asked to reject.

Author of How Does It Feel to Be a Problem? Being Young and Arab in America

In Presumed Guilty, Todd Green slowly and methodically destroys the dangerous myth that Muslim equals terrorist. In its place, Green not only shows us how Islamophobia harms everyone, Muslims and non-Muslims alike, but also offers a guide for building better interfaith understanding. Presumed Guilty is timely, necessary, and an incredibly useful book.

Author of Pulitzer Prize finalist If the Oceans Were Ink: An Unlikely Friendship and a Journey to the Heart of the Quran

Todd H. Green is a rarity in the academic community: a scholar who can seamlessly weave his academic knowledge together with real-world experience, in prose as clear and lively as a brook. In an age when facts are ignored and experts maligned, Presumed Guilty is a book we need now.

Lucid and personal, scholarly and accessible, Todd Green reminds his readers that the humanity of Muslims comes before the crimes committed in their name by some. The implication that most Muslims are held guilty by association by sections of the media, policy makers, and some governments for the unspeakable terrorist crimes most Muslims deplore is to dehumanize the world’s second-largest religious community. Presumed Guilty counters the false and damaging narratives of Islamophobia informed by a Christian perspective with clarity and humanity. A must read.

Presiding Bishop of the Evangelical Lutheran Church of America

As Christians, we are called to live out the greatest commandment: to love God and neighbor. In a time of rising Islamophobia and bigotry, this means we must defend our Muslim neighbor against the twin falsehoods that Islam inspires and condones terrorism and that Muslims are solely responsible for its repudiation. As Todd Green demonstrates, all of us—as people of different religions and worldviews—are responsible for condemning oppression, violence, and terrorism and detrimental to human flourishing, just peace, and the well-being of creation.

Todd Green’s Presumed Guilty moves us through treacherous terrain in a thoughtful fashion, filled with great stories, and without unnecessary jargon. We learn how to talk about religion and the role it does (and does not) play in terrorism, how to speak with Muslims about terrorism, and how to understand that the larger context of terrorism has nothing to do with Muslims. It is strongly recommended for members of the press, policy makers, and anyone interested in interfaith conversations.

Director of research at Institute for Social Policy and Understanding

Green’s book is essential reading for anyone still asking Muslims to coddle bigots with reassurance. He makes a clear case for why all people should be afforded the assumption of basic human decency.

Host of The Thom Hartmann Program

Rabbi and executive director of T'ruah: The Rabbinic Call for Human Rights

Todd Green offers a nuanced perspective on the history and place of Muslims in America, and a crucial corrective against the rampant and dangerous stereotyping of this group of fellow Americans. 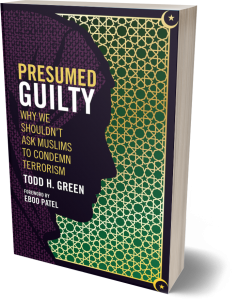